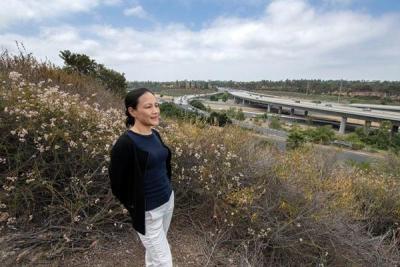 This article was originally posted on the UCI Newsroom and included in the Spring ’22 issue of the UCI Magazine.

Not long ago, smog was as much a part of the Southern California landscape as the Hollywood sign it sometimes obscured. Though less visible and greatly diminished, air pollution is still a part of our lives, says Jun Wu, a UCI professor of public health in the Department of Environmental and Occupational Health.

“We still see a lot of adverse health effects,” she says. “Concentrations of fine particulate matter have even risen due to wildfires. And while outdoor pollution temporarily dropped during the COVID shutdown, we published a paper showing that indoor pollution increased, because with everyone staying indoors, there were more combustion byproducts from cooking, more chemicals from cleaning products and so on.”

Wu and her department colleagues and students track such data, particularly in underserved communities, to present stakeholders such as health officials and civic leaders with information and potential solutions.

“I look at environmental exposures of people to various agents, such as air pollution, noise, heat, wildfires, etc. and also at the health impact of those exposures,” she says.

For example, Wu is collaborating with Alana LeBrón, a UCI assistant professor of public health in the Department of Health, Society and Behavior, on a study of lead contamination in Santa Ana and its effects on children’s health and academic performance. In addition, she’s helping communities tackle concerns about air pollution and wildfire impacts, including industrial and firework emissions in Santa Ana.

Wu’s work isn’t all about dealing with problems: “I’m very excited to be exploring the beneficial effects that parks and other green spaces can have on better health outcomes for people – how they can help relieve stress, improve concentration and encourage physical activity. Trees can also absorb certain chemicals from the atmosphere, while a tree canopy provides shade. Unfortunately, the vulnerable communities that have more pollution are also the communities that have less green space, so the goal is finding ways to address that.”